Sherman Swift was an 11-year-old child living in Petrolia, Ontario, in 1889 when he lost his sight while trying to blast a toy oil well with gun powder.  The future champion of the CNIB Library studied at schools for the blind in Ontario and Michigan, and later attended McGill and the University of Toronto, listening attentively to lectures, copying braille notes, and having friends and relatives read to him.  Over time he amassed academic honours, and in 1907 became the first blind Canadian university graduate in a course of modern languages.

Swift intended to teach, but he was denied a certificate due to his blindness; 15 years later, it was granted, but by then he was embarked on the career that would become his life’s work, in the Library of the CNIB. That career began in 1909, when he became Secretary of the Canadian Free Library for the Blind, taking over as Librarian a few years later from Marion Robinson.  Through his work at the Library he became one of the founders of CNIB, and Chief Librarian of the Library and Publishing Division, a position he held until his death in 1947.

An early profile from the "Toronto Daily Star" of this “modest and engaging” librarian is titled “Wonderfully Gifted Blind Man is Toronto’s Blind Poet, S.C. Swift:  He led His Class in McGill University, Is Proficient in Modern Languages and in Public Speaking—Secretary of Library for Blind, Which Has Biggest Circulation Per Capita of Any Other Library in the World—Jumps Moving Street Cars.”

Among his many accomplishments as Chief Librarian was his involvement in moving towards a universal system of braille in use in the English-speaking world, instead of the multiple systems in place earlier in the century.  His CNIB obituary noted that he had presided over a library that grew from a few hundred embossed print volumes  in 1909 to "a modern library with its thousands of square feet of space and its shelves groaning under the weight of over 24,000 volumes of embossed Braille, Moon type, and music and several thousand talking book records." 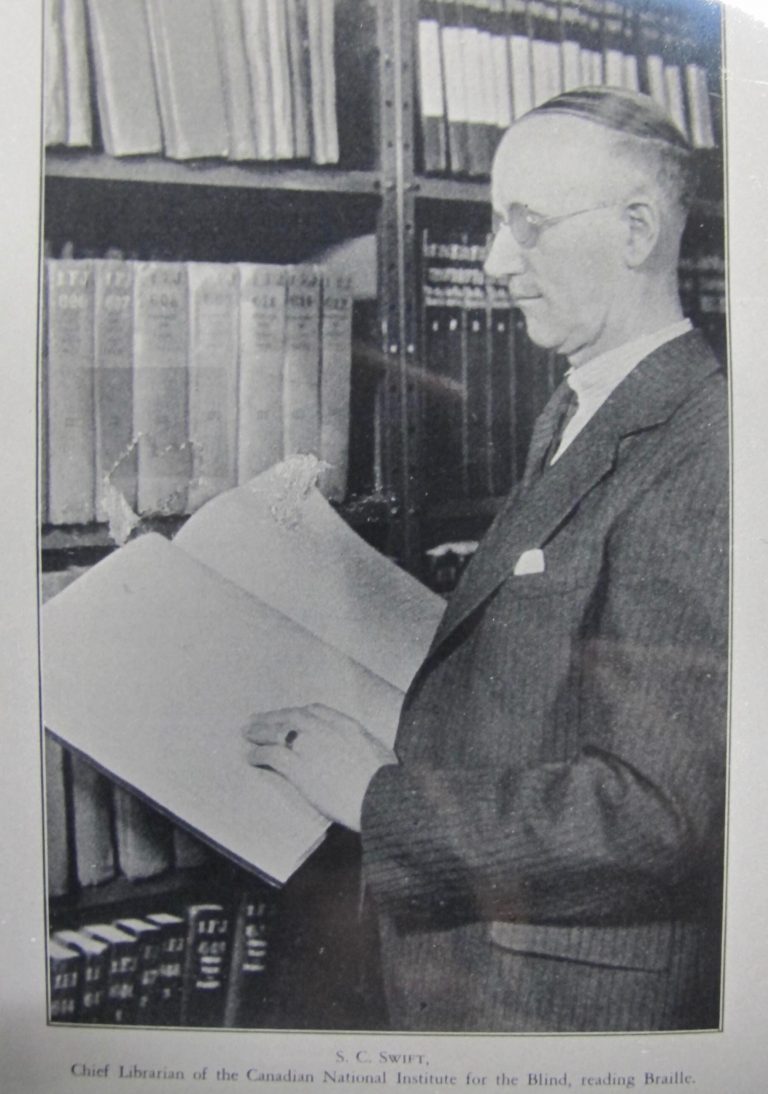 Swift embraced the gate-keeping role common to librarians of the day, seeing himself as a guardian of library clients’ morality when purchasing or circulating risqué material.  For example, he complained about “the increasing amount of sex-nonsense which is appearing in Braille” and noted that the library held “several works concerning which I have felt obliged to issue strict orders to my assistant in charge of circulation that they must be loaned only with the greatest care and not without knowledge of the age, degree of education, and, if possible, moral character of prospective borrowers.  If we cannot be sure on these points—well, these books simply stay with us, that is all.”

“
The key person in library work for the blind in Canada and one of the foremost figures in this field on the continent
— "In Memoriam," National News of the Blind, July 1947

Swift kept up a voluminous correspondence.  When he died in 1947, the letters poured in, including one that noted “it will be hard…to find an adequate successor to such a man, but what will matter most of all to me is just the loss of the personality of this gallant fighter, who was indeed one of God's Heroes.”  In his CNIB obituary, Swift was acknowledged to be “the key person in library work for the blind in Canada and one of the foremost figures in this field on the continent."